John Fitzpatrick - How Birds Can Save the World

Tuesday, 15 December 2020 (8:30 – 9:30 PT)
A Minnesota native, Fitzpatrick received his B.A. from Harvard University (1974) and Ph.D. from Princeton University (1978). Through 1989 he was Curator of Birds and Chairman of Zoology at Chicago’s Field Museum of Natural History, studying ecology of Tyrant Flycatchers and community dynamics in the Andean foothills of Peru. In 1988 became Executive Director of Archbold Biological Station in central Florida, where he continues his decades-long collaborative study of the ecology, behavior, landscape genetics, and conservation of the endangered Florida Scrub-Jay. At Cornell since 1995, Fitzpatrick has overseen development of the Cornell Lab of Ornithology into a world-renowned center for ornithology, conservation biology, and citizen science. He has authored or co-authored more than 150 scientific papers, and four books including the world’s leading college-level textbook on ornithology. Together with colleagues at the Cornell Lab, he pioneered eBird, now the world’s largest citizen-science project and a global standard for ecological monitoring. His numerous honors in ornithology and conservation include awards from American Ornithological Society, The Nature Conservancy, Linnean Society of New York, and National Audubon Society. He was President of the American Ornithological Society (2000 – 2002), on the International Board of Governors of The Nature Conservancy (1995-2006), Trustee of the National Audubon Society (1995 – 2001), and on three U. S. Endangered Species Recovery Teams. Fitzpatrick lives with his wife, Molly, on a forested hillside in Ithaca, NY.

Login to watch on demand. 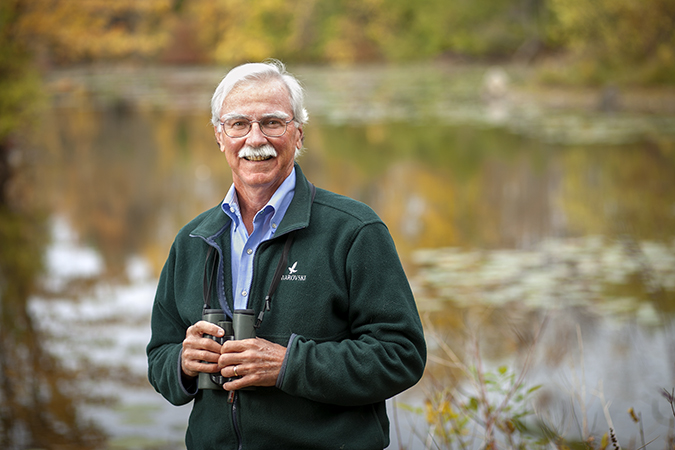