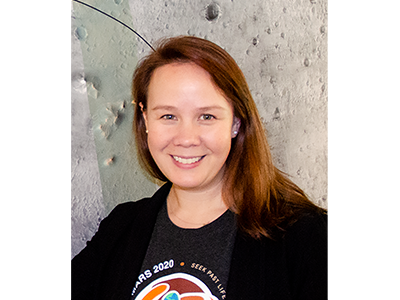 One Year in Jezero Crater with the Mars 2020 Perseverance Rover

Katie Stack Morgan is a research scientist at the Jet Propulsion Laboratory in Pasadena, CA, the Deputy Project Scientist of the Mars 2020 Perseverance rover, and a participating scientist on the Mars Science Laboratory Curiosity rover mission. Originally from Cheshire, Connecticut, she graduated with a B.A. in geology and astronomy from Williams College in 2008 and earned her M.Sc. and Ph.D. in geology from Caltech in 2011 and 2015, respectively. For her work on the Curiosity rover, she was named to the 2013 Forbes’ list of 30 under 30 and has earned several NASA Group Achievement Awards and a NASA Software of the Year award. Katie’s research focuses on the Martian sedimentary rock record, using orbiter and rover image data to understand the evolution of ancient surface processes on Mars.