You are attending #AGU20 to meet great people and learn new things that can help you inspire and shape the future of science. The various networking opportunities makes it easier to connect with peers from around the world for meaningful discussion. Explore new ways to unlock collaborative learning at #AGU20.

Our networking events will provide a space to collaborate and connect virtually! Learn and share ideas with peers across the globe with text-chat Pods and Global Café events. Consider attending social events such as Braindates where you can have one-on-one conversations or our Virtu-ale Happy Hour where you can unwind with colleagues!

Find more information on your networking options below and participate in these events to continue the meeting from day to night.

There is a new way to “bump into someone in the hallway” at #AGU20. If you want to meet up one-on-one or with a small group to discuss a scientific or other topic, the Braindate networking platform is the place to go.

Learn more about networking with your peers and how it works.

Pods are a great option for Fall Meeting attendees who want to interact with colleagues and fellow attendees outside of the scientific sessions.  Each text chat pod can be reserved for a 30-minute time slot.

Join members of AGU’s Global Engagement Committee at the Global Café! This networking experience connects attendees with others who are either tuning in from their region or are interested in working in their region. Each 30-minute event will focus on a different region around the world and will feature small breakout groups to get to know each other. To ensure an opportunity for small group discussions, admittance is limited to a maximum of 150 attendees per event.

If there is interest in breakout rooms in specific languages, please contact Mark Shimamoto prior to the event.

AGU is hosting a variety of networking and social events to help you relax, unwind, and enjoy time with your colleagues. Share your excitement on social media or on your pages with our virtu-ale images for download. 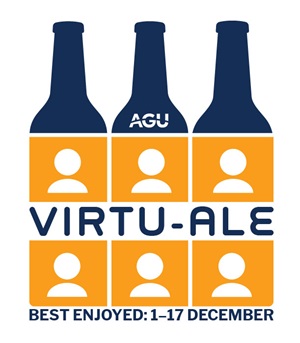 Virtu-ale Happy Hour: Behind the Scenes with the California Academy of Sciences

Join us for a fully interactive, family-friendly virtual event with the California Academy of Sciences. As our guest, you will immerse yourself in the wonder of nature and ignite a deeper connection with the natural world. Presentations will include Zoology experts discussing Claude an albino alligator, South African Penguins colony and Bone/Skull Specimens.

Virtu-ale Happy Hour: A Discussion of the Apollo 13 Mission

Immediately when the oxygen tank onboard Apollo 13 exploded, alarms sounded. Jerry Woodfill, former NASA Warning System Engineer, was responsible for the alarm systems on multiple Apollo missions, including Apollo 13. April 2020 marked the 50th anniversary of the harrowing mission, so Adler Planetarium's own Dr. Andrew Johnston sat down with Jerry to talk about his Apollo 13 experience and heard his song about the importance of ordinary objects, like duct tape!

Virtu-ale Happy Hour: An Evening with New Orleans - History and Legends Through Cocktails.

The New Orleans Drink Lab sits in the heart of downtown New Orleans. It's led & founded by master bartender, Daniel Victory, who has been lauded as a pioneer of the New Orleans "craft cocktail" emergence and is considered one of the most engaging ambassadors of the Crescent City. Victory has assembled a team of master bartenders who have decades of industry experience.  Join us as Daniel takes us on a unique and historic journey through New Orleans and its most famous libations.

Note: If you would like to engage fully in this opportunity, we are providing you with a recipe and ingredient list to help you prepare for this event.

Dr. Robert Conte, who has been The Greenbrier’s Historian for over forty years, will give a brief overview of the resort’s long history stretching back to the early Nineteenth Century and explain its evolution into one of the Twentieth Century’s finest destination resorts.  This will include a special emphasis on the remarkable relationship with the United States Government during the Cold War whereby a secret underground bunker--an emergency relocation center--was built to house Congress in case of war. For thirty years the resort was prepared to be taken over by the government and serve as the location of the legislative branch of the Federal government.